Writing case briefs (or case notes as they are called in Australia) is a common form of assessment in law school, especially with first-year law students, as a way of exposing them to basic legal research, writing, and thinking skills before moving on to substantive subjects.  More importantly, the preparation of a case brief is usually the first taste first-year law students have of reading case law and identifying the holding (something that’s called the ratio decidendi in Australian law schools). It is also a common piece of legal research writing both in legal practice and in academia.

But my experience of teaching and marking case note writing, and informal discussions with students, indicate that they have consistently struggled with the case brief assessment – particularly with the identification and explanation of the holding.

A few years ago, I decided to go back to fundamentals in planning how to teach case brief writing. But rather than starting with the activity itself, I started with some basic principles of lesson design and planning.

Unlike the United States, an LLB is the most common method of entry to the legal profession in Australia.  There are prescribed learning outcomes associated with the degree as a whole, and individual units within the degree, that are determined nationally by the Council of Australian Law Deans (the Teaching and Learning Outcomes (TLOs) for LLB students) and the Law Admissions Consultative Committee.  However, like American law schools, each unit also has learning outcomes approved by the Dean of each faculty. Some universities also have a set of graduate attributes applicable to all units offered on campus.

Good curriculum and instructional design mean that each of these sets of requirements should be aligned within a unit or course and reflected in assessment as a way of demonstrating that an individual law student has been assessed against accepted expectations.

If we had to picture that hierarchy in an Australian law school for a case brief assessment, it might look something like this: 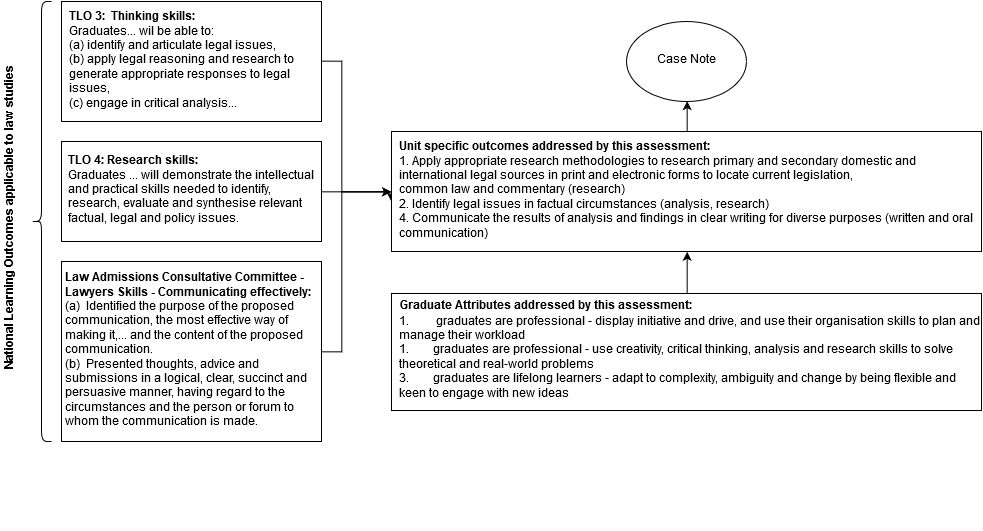 But just identifying the requirements isn’t enough. We also need to think about the law students that we will be working with. That is going to include things like the size of the group, their age, their educational experience so far, and their current level of confidence.

Each of these things is going to be critically important to the design of the lessons. For example, the majority of first-year law students in Australia tend to fall within what identify as a period in social and cognitive growth associated with ‘young adulthood’.  Studies of learning at this stage suggest that students at this stage struggle with ambiguity and assume that there is one right answer according to what lecturers or tutors tell them.

In writing a case brief, that’s important. There is rarely one correct version of the holding and one correct way to set out a case brief.  Explaining that there may be different ways of expressing the holding, and in fact that an important part of advocacy is to argue for a particular interpretation, is difficult and at this stage, ambiguity needs to be de-emphasized until the basic skills are established.

Despite case briefs being endemic to legal study, surprisingly there is no consistent or single method in how to teach or write one.  Frustratingly for students, there is no pro forma or precedent for presenting it.

However, where the skill being introduced is entirely new to the learners, there is a need to provide more active support and direction initially before providing opportunities for practice.  That means providing very structured explanations initially as a means of building – scaffolding – students to take an increasingly independent role.  Rather than just explaining what a case brief looks like, I write one in class, explaining what I am doing as I work through the decision. In a series of planned steps, I begin to hand over responsibility for the task to students, moving ultimately to getting students to work independently. 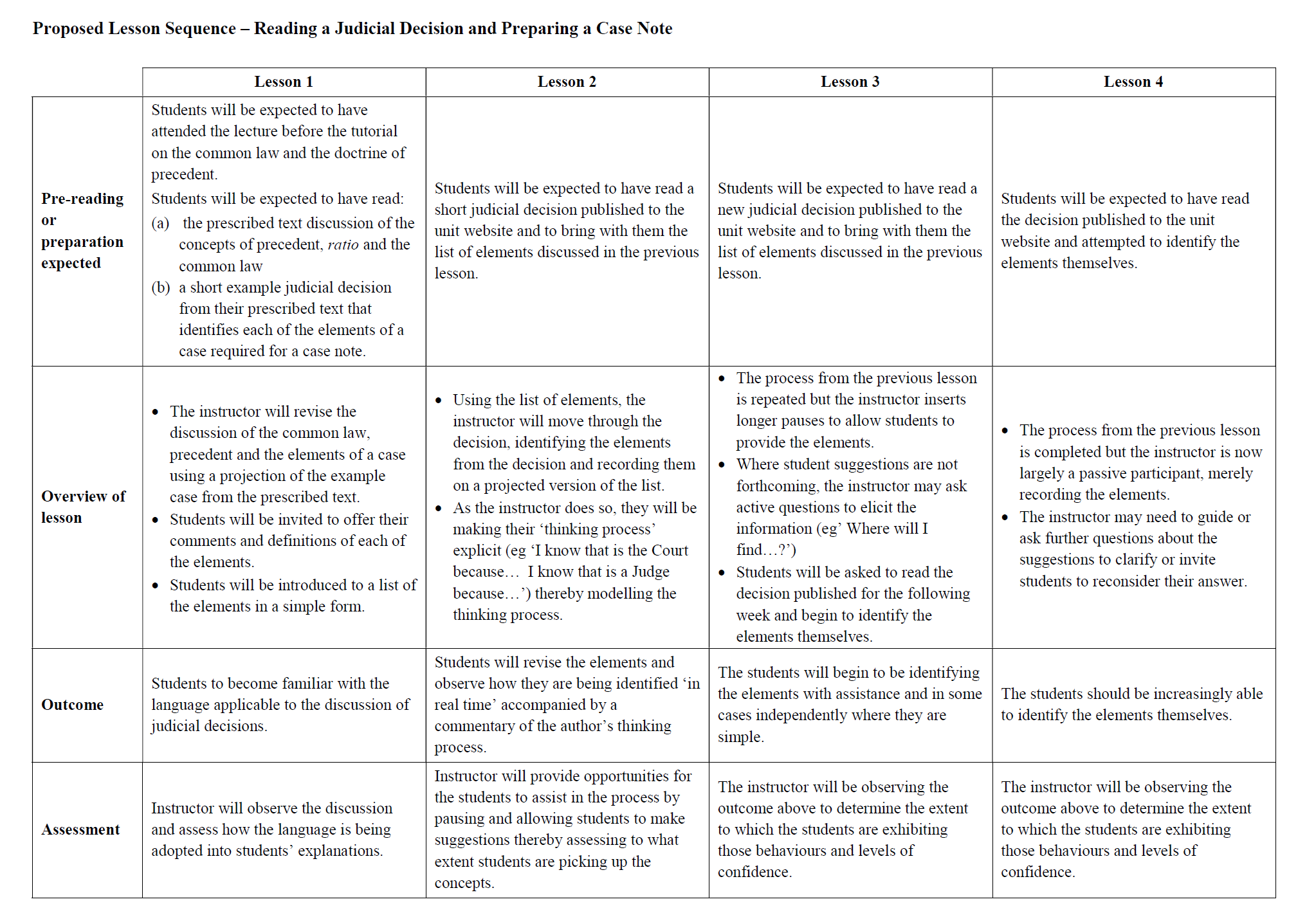 Law students I have worked with, after stepping through this series of lessons, have generally expressed more confidence and performed well in case brief writing. Just as importantly, they have demonstrated much more confidence at the end of the process in tackling the process of reading cases.

What do you think? Is it worth a try in your law school classroom? Could it be improved?