By Carman A. Leone, Maj, USAF[1]
Assistant Professor of Law

In the spring semester of 2017—sitting in a fluorescently lit, sterile classroom—I watched a pair of my students awkwardly negotiate in the front of the classroom with my colleague who was playing the role of an Afghan police chief.  The simulation was a roleplay assessment offered as part of the United States Air Force Academy’s negotiation course.  The students were playing the role of two junior Air Force second lieutenants who needed to negotiate security protocol with the police chief in his Afghanistan-based office.  The students mechanically applied a few of the negotiation skills I taught them during the course.  One of the students smirked at something my colleague said while in character, seemingly scoffing at the ridiculousness of the simulation.

This irritated me.  I wanted the students to take the simulation seriously and chalked up their lack of enthusiasm as their problem, not mine as the professor.

Shortly after, I realized it was my problem.  After the simulation, but before fall 2017 semester started, I participated in an “escape the room” game.  The premise of escape the room game is to solve a series of riddles and puzzles using clues embedded in a thematic setting.  Although the building which housed the game was in a nondescript industrial park, my particular game was set in a mountain hunter’s cabin, complete with trophy mounts, wood paneling, a worn bookcase, pad-locked drawers inset within a desk, and a trap-door-backed fireplace.  As I crossed the threshold from the office waiting room into the “game room,” I was transported.  Dozens of details in the room were clues that lent to a piece of a bigger puzzle.  For example, by reading backwards a riddle inside a tattered book on the inconspicuous bookshelf in the corner of the room, I realized I needed to count the number of “points” on the trophy mounts hanging on the wall, which then provided the numerical combination necessary to open a pad-locked drawer of a desk in the room.  The contents of the drawer provided another clue for the next puzzle.  For sixty minutes I felt as though I was truly locked in a hunter’s cabin, largely due to the thoughtful details which made the game authentic.

Before conducting the Afghan simulation again the following semester, I decided to transform my classroom into the Afghan police chief’s office, using the inspiration from my experience in the escape the room.  First, I placed two free-standing floor lamps in the room to provide low, warm lighting to replace the fluorescent lamps that previously shined overhead.  I moved a light-weight bookshelf next to a freestanding, dark-stained table which served as a desk.  I stocked both with a few books and mementos typical of a real office.  A framed picture of my family sat on the desk next to a collection of dry erase markers which the best students would ultimately use to brainstorm potential options on the flipchart resting on an easel just feet away from where they sat.  A framed, ornate dagger was placed on the edge of the desk for intrigue and intimidation purposes.  A side table, set with a water pitcher and four matching glasses, sat inconspicuously next to the desk.  Behind the desk, a “to-do” list was written on the large whiteboard, serving as clues to the interests of the police chief, about which the wisest of student would inquire.  There were dozens of planted details and clues that students could have used to help unlock success in the simulation. 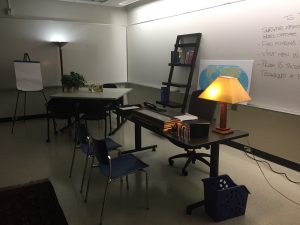 Remarkably, very few students used the clues that were within fingers’ reach of where they sat.  The students who performed the best identified the planted clues and used them effectively.  For example, students who noticed the framed picture on the desk and asked whether the Afghan police chief was a father or husband, created a terrific opportunity for rapport building.  Even better, those students who asked about to the “to-do” list written on the whiteboard behind the desk unlocked a number of interests of the police chief that were not otherwise apparent.  One of the best pairs of students asked the Afghan police chief to sit at the side table where they all would be more comfortable, eliminating the power dynamic by removing the police chief from behind his desk.

In a debrief following the exercise, students noted just how unique the experience was.  Many reported feeling nervous and unsure of themselves when they walked into what they described as “the dim lair of the Afghan police chief.”  Some claimed to have recognized the planted details, but many admitted they did not know what to do with them.  Some recounted the adrenaline they felt walking into the room, as if they were stepping onto the sports field ready to compete.  Others described crumbling under the weight of nervousness and uncertainty.  All agreed the experience was unique and realistic.

A few students offered ways to even further improve on the experience.  For example, one student suggested playing authentic Afghani music at the beginning of the exercise while students walk into the office to begin the simulation.  Another student offered the idea of lighting incense in the room to add to the authentic experience.

Ultimately, I offer this advice to educators concerned with the lack of enthusiasm in roleplay scenarios:  if you want your students to submerse themselves into your simulation, make it irresistibly authentic.  Not only will it improve the level of engagement, but it will provide a unique opportunity students may not experience until they graduate.

[1] The views expressed herein are those of the author and do not necessarily reflect the official policy or position of the United States Air Force Academy, the U.S. Air Force, the Department of Defense or the U.S. Government.